I WANT TO CUT YOU OPEN, SEE YOUR COLOURS RUN

I discovered My Little Pony: Friendship is Magic when I was maybe 10 or 11 years old. I never really got into the show itself, funnily enough. Like I enjoyed the few episodes I have seen, don't get me wrong, but I never really watched it. What I did enjoy, though, was the fandom. Yes, one of the most infamously horrible fandoms in history, I absolutely adored. Still do, if I'm being totally honest. Hell, I'm active on Derpibooru - that's evidence enough that I'm a shameless ponytard. XD

As fucked up as the brony fandom can be, a lot of awesome creative stuff has come out of it. HOWEVER! This page won't cover most of the amazing works this fandom has to offer. No, this page is dedicated to the more spooky scary side of things. ouo

The first fanfiction I read out of the fandom was the dreaded Cupcakes written (supposedly) by Sergeant Sprinkles. I first heard about it from a couple friends while we were hanging out on a join.me session. The link to the story was dropped in the chat, and I was off to read the story. Looking back on it now, I can't imagine why it scared me so bad. It wasn't even a well written story, what with its dozens of grammar issues, and stilted dialogue. But oh well, it was enough to freak 12 year old me out lol. Surprisingly enough, I don't think it ever gave me nightmares! What it did give me though is the inspiration to make an evil version of my fursona at the time. More on those sonas... on another page someday... maybe. :P
The original author was heavily debated at the time, multiple people were claiming to be the real Sergeant Sprinkles, however the true author can be found on deviantART as dreckerjones. The original fanfic is also somewhat of a struggle to find, so I've decided to archive it on my site. Link here.

Most people associate Pinkamena with Cupcakes, and draw fanart for the fic with a straight-haired Pinkie, however this doesn't make chronological sense. The episode Party Of One came out in April of 2011, meanwhile the fanfic was posted on /co/ in January of that year, only a few months prior.

When the fanfic was shared on Equestria Daily, MLP's most well known fan site, it was categorized as [GRIMDARK AS FUCK], and was "legendary for being the most brutal and disturbing pony story ever written." However, that title was given to Sweet Apple Massacre once it made its debut in June 2011 for... obvious reasons (if you know, you know). 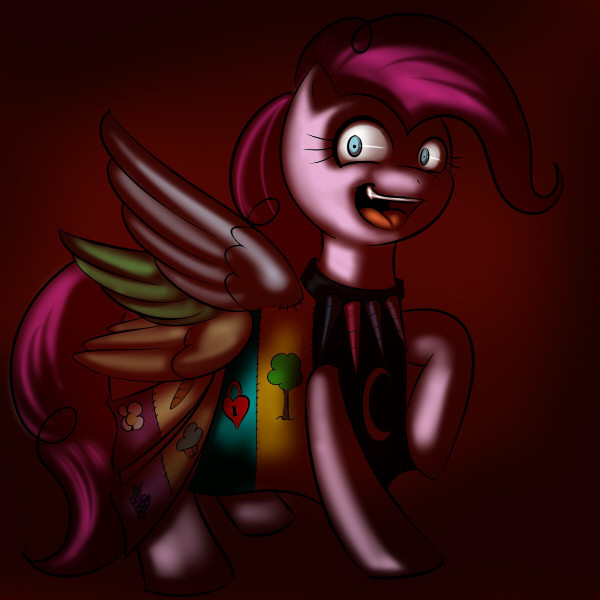 My second fanfiction from the fandom was Rainbow Factory by Aurora Dawn. I'm unsure of exactly how I came to find out about Rainbow Factory, whether I was trying to find creepy stories to read, or if I was listening to MLP music, but boy am I glad I found them. To this day, I still have my old YouTube mega playlist with a bunch of Rainbow Factory remixes. Granted, most of them have been unlisted or deleted, but the list is still there.